One common bit of advice with respect to security is to require frequent password changes.  This "best practice" has persisted for decades despite some prominent criticism.  But, is password expiration actually helpful or not?


Password expiration has a negligible effect on limiting or preventing malicious behavior.  The ability to steal passwords often implies privileged access to your systems or network.  If the attacker has administrator rights, access to the password database or the ability to sniff traffic on your network, he can install a backdoor or continuously steal passwords in order to avoid the expiration window.  That’s assuming he even needs continued access to accomplish his goal.  If the attacker only needs short-term access, which is often the case, password expiration is irrelevant.

A lot of people seem to think that it's okay to use something like salted SHA-1, without any key stretching, as a password hash.  The following graphic shows how many guesses an attacker would be able to make per user on a daily or monthly basis assuming that he can make either one thousand or one billion guesses per second.  One thousand guesses per second indicates a password hash such as bcrypt or PBKDF2 that includes stretching to slow down the hash.  One billion guesses per second is a reasonable estimate for a single iteration of MD5 or SHA-1 (depending on your hardware) . 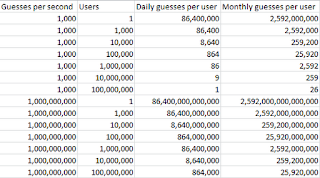 It should be obvious that salting is not enough.  Even with a site that has 10 million users, an attacker can make millions of guesses per user per day against salted SHA-1* or MD5. A strong password hash literally makes password cracking a million times harder.  If an attacker can only guess a handful of passwords per day, per user, then any user with a password that isn't his name, username, or on one of the worst passwords lists is probably going to be okay.  There is some safety in numbers.

If an attacker targets a single account, he can still make millions of guesses per day, even with a strong password hash.  There is no safety in numbers once the attacker is focused on you.  Pick good passwords.

* I used SHA-1 as an example because it's common.  The SHA-2 family are stronger cryptographic hashes, but they don't provide any significant benefit beyond SHA-1 for password hashing.

Edit: I'd like to point out that, for simplicity, these numbers do not factor in the number of passwords that are actually cracked along the way.

This post is a brief introduction to passwords.  All of my other posts assume some prerequisite knowledge that may make them inaccessible.  If you already know about password cracking, hash functions, salting, and stretching, you can probably skip this post or perhaps just skim it.  If those concepts are new to you, you're in the right place.

Please post any questions you have in the comments.  I will try to answer questions and/or update this post as required.

Most operating systems and web applications authenticate people using passwords.  In order for this to work, the server (or application) has to store some information that will allow it to validate the password.  One way to accomplish this would be to just store the passwords in plain text, but this would be a big problem if the password file or database was ever stolen. The solution most systems use is to hash the passwords.

The issue of password complexity came up at work today so I put together a small spreadsheet detailing how long it would take to crack unsalted passwords of a given length and how many passwords per day or year an attacker could expect to recover in an offline attack.  I assumed that there are 10k users and that an attacker can guess 20 billion passwords per second.  The speed estimate implies that the attacker is using a  GPU-based password crackers such as CryptoHaze or oclHashCat and that the underlying hash is something fast like MD4 (Windows) or MD5 (many websites).  Here's what the numbers look like:

I highlighted the lengths/complexities that would yield less than one password per day for an attacker.  That's a pretty arbitrary requirement, but it seemed like an okay minimum.  Your requirements may vary.

The numbers indicate that passwords should be at least 10-12 characters long (depending on the character set), but they also assume truly random passwords.  Since people do not actually pick random passwords, I'd add at least two to three characters which brings us up to 13-15 characters (again, depending on the character set).  In order to avoid the increased support costs and general discontent that is likely to arise from requiring 15 character passwords, it's probably a much better idea to adopt a stronger password hash and/or two-factor authentication instead.  With scrypt, bcrypt, or PBKDF2 (and reasonable cost values), seven and eight character passwords start to look pretty good again.

This is a explanation of RSA that I wrote about a year ago for a discrete math class.  I've shared this a few times so I'm posting it here in hopes it will be useful to others. Please post comments if something is unclear or if you think you've found a mistake.

A user's public key is used to encrypt messages intended for that user.  The user can decrypt those messages using his private key but an attacker with only knowledge of his public key cannot decrypt the message.  This allows the user to share the encryption key publicly for anyone that might want to send him a secret message (hence “public”).  The user must keep his decryption key secret (private).

Cryptography can be a difficult subject to learn.  Until recently, there were only a few books available and, even now, most of them aren't well-suited to self-study for anyone who doesn't already have a strong math background.  Cryptography is a mathematical field.  If you want to be cryptographer, you will have to learn probability, number theory, abstract algebra, etc.  But, those aren't strict prerequisites to learning basic cryptography so you can study those areas as you go along.

I became interested in cryptography in the late 1990s after reading Schneier's Applied Cryptography, but I had other interests, responsibilities, etc. so I never went very far with it.  Recently, I've been trying to take my skills to a higher level and I've found several resources that are helpful to me.  Those are outlined here.